This is from a low profile A-Open case that’s quite a few years old now but still in as-new condition and has been working well. The power supply sat on standby for some time and when it was needed did not go. Being a low profile case, it’s not possible to just swap a new power supply in. The PC was tested on the bench with a standard tower-case power supply and it worked fine. To save having to replace the case and rebuild the PC, I decided to repair the failed power supply.

Taking the power supply apart revealed a bit of a mess around the main input capacitors, a blown fuse on the PC Board, a burnt 200K resistor and corroded wire jumper where the capacitor had leaked on it.

The board was cleaned up and to remove all mess, glue and leaked electrolyte. New parts were ordered and we waited a couple of weeks for them to arrive.

The new parts were fitted and the unit tested on a current limited 230V-AC mains supply. It worked well so it was closed up and put back in the PC case.

On standby the PC draws 4 watts and running it fluctuates between about 50 and 90 watts. It has a AMD processor of about 2.2GHz and 512MB RAM. Video is on the motherboard. All up the repair cost about NZ$25 in parts and an hour of time. 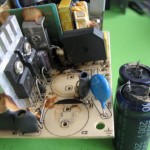 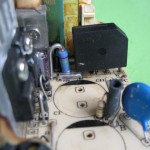 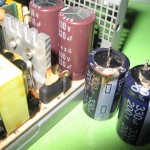 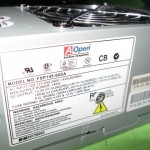 Why repair an older PC ?

Unless you are forced to replace the hardware due to a OS upgrade, it’s usually possible to greatly extend the life of a PC. Many older PCs are still perfectly usable as a home PC for web browsing, email, and standard home office use.

Most PC power supplies are all quite similar and generally not too difficult to repair. User PCs often need a clean out to remove the dust build-up and sometimes a new fan or two. Generally cheaper than buying a new PC, if you can find someone to do the overhaul.

Second hand PCs from ex-lease etc. are often quite good value for money. These can sometimes do with the same overhaul.