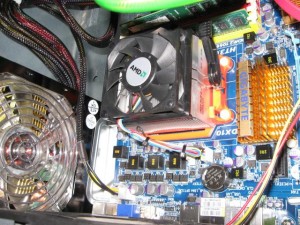 Recently I transferred the blog to a faster machine. A AMD dual-core system that I’ve had for a few years. This significantly improved the page load times.

On the bench for a couple of weeks it worked fine; out in the open with little load. Once in service and closed up I found it would occasionally switch off with no warning.

I installed lm-sensors and kept an eye on the CPU temperature, which got up to about 70 deg-C on hot days with ambient of about 25 deg-C.

I’ve seen this before and decided to clean out the CPU fan-heatsink and replace the thermal paste. The original grey thermal goop was quite thick and had a few fine lines suggesting that it may be drying out.

With the clean and a thin coat of silicon paste between the CPU and heatsink, it now runs with the CPU cores about 25 deg-C above ambient. A reduction of about 20 deg-C, and much more reliable. 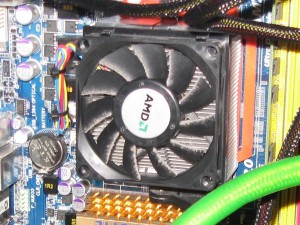 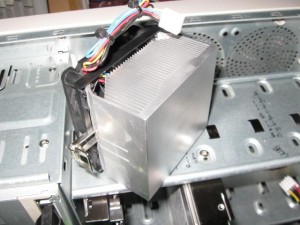 The bios had a setting to adjust the alarm temperature but none to set the shutdown temperature.