According to the Specifications 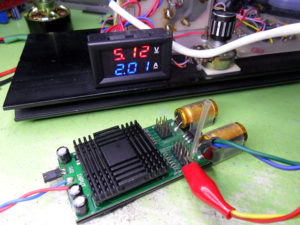 The Power Unit is a dual voltage regulator intended for use in larger scale RC with bigger servos and greater power requirements.  The higher current ( 8-Amp ) servo output can be jumper selected between 6.2V and 6.7V.  The lower current ( 5-Amp) receiver-controller output is at 5.3V.  Both regulated outputs can be switched on/off by a connected low-current switch.  The input can be 7.4V to 12.6V; 2-3 cell.

A linear BEC passes current straight through but reduces the voltage.  The voltage difference x current = power lost in the regulator = heat which has to be removed.

Just because there is a heat-sink does not mean it can handle more power.  The heat still has to go somewhere, usually to passing air.  Heat-sinks need air-flow, otherwise they just get hotter and hotter.  Too hot and the regulator will fail.  Heat-sinks are usually rated in deg-C/Watt in still air.  Each watt of power applied will raise the heat-sinks temperature by ?? deg-C.  So the Power Unit heat-sink has a rating of about 13 deg-C per watt – see “Testing” below.

This unit had no output on the receiver regulator.  Two components were replaced, the main power regulator mosfet and the low-R sense resistor.

Applying 8 volts to the input and a 2 Amp load on the output (at 5.1V) means the input power is 16 watts (8Vx2A) and the output power is 10.2 watts (5.1Vx2A).  The missing 6 watts is dissipated as heat in the regulator and must be handled by the heat-sink.  In this case after a short time the heatsink was at 98 deg-C with an ambient temperature of 21 deg-C;  no significant air-flow and the heat-sink facing up, horizontal on the work bench.

An example large model may draw an average 4 Amps from the servo regulator and 0.2A from the receiver supply.  If using a 3-cell LiPo battery at 11.1V  could require the Power Unit to dissipate 20 watts.  With a heat-sink rating of 13 deg-C/W, the heat-sink in still air could reach 260 deg-C above ambient; obviously not good. Using a 2-cell Lipo at 7.4V the dissipation could be 5 watts and the heat-sink could reach 65 deg-C above ambient, which is manageable.

The Power Unit is a big dual channel BEC.  If you take care of the heat with good air-flow and use good wiring and installation practices, it should be OK for some applications, especially if used with a 2-cell LiPo battery.

I would not recommend linear regulators for large, expensive or dangerous models.  There are better ways to use switch-mode regulators wired for redundant backup.  Noise filtering and capacitance on the power supply needs to be considered.  A lot of RC BECs and UBECs are not well filtered as supplied – a story for another time.