A while ago I commented on my first Flytron SimpleOSD that I managed to damage by connecting the current sensor incorrectly.

I have taken the Atmega328 micro off the board, fitted a new one and swapped the crystal to a 3-pin 16MHz ceramic resonator. I’m not a Atmel fan so it took me a while to sort out the AVRISP-MKII programmer connection and then to install the Arduino bootloader using the Arduino IDE running on on Linux.

I loaded the diy-osd sketch by Dennis Frie and adjusted it for SimpleOSD and 38400 baud for the GPS. Loading the sketch is a bit tricky as normally Arduino has control over reset; but not on the SimpleOSD board. You have to connect the serial lead, start the load and then quicky connect power to the board. If the timing is good, it will load. If not it will complain about something not responding.

At first the OSD display was just showing what looked like interference. It turned out that I had changed a couple of resistor values on the SimpleOSD board to improve the display. Putting these back to normal and it worked.

I’m using a Unitraq GT-720FW 1Hz GPS module which is a bit larger than the tiny ones but has a decent antenna, internal backup battery, is self contained and works quite well. It even gets a lock indoors, which most won’t. I used Arduino to send it some hex commands to set the messages and baud rate.

The DIY-OSD display looks good on the bench. Clear characters with a dark background behind the text. I fit it into the canopy of the Hawksky to try it out. I have a 25A or 30A current sensor here that should work to fill in the current and capacity figures. 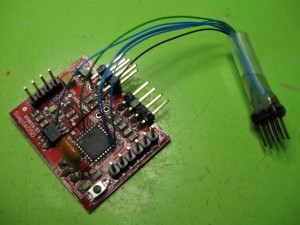