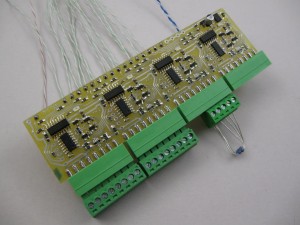 Available from Access Security Ltd. this is a 16 channel monitored-line interface adaptor board for security sensor interfacing.

As is standard security system practice, end of line (EOL) resistors at the detector or sensor are switched to represent, closed open and tamper states. Faults such as short or open circuited wiring is detected as a tamper state.

Note: referenced below, Gnd is ground, -ve, common, etc. (depends on your terminology).

This is standard security EOL wiring for single zone per input.

Strobe is a very brief flash. There will be a dim glow between flashes, this is normal.

Open collector transistor outputs switch to Gnd; similar to a relay contact. There will always be a volt drop across the transistor; it does not switch hard to Gnd. Each output can sink 50mA.

The board requires 12V DC (9-14V DC safe range) at 80mA. This should be a clean regulated power supply from the security or PLC controller; not a unregulated plug-pack. 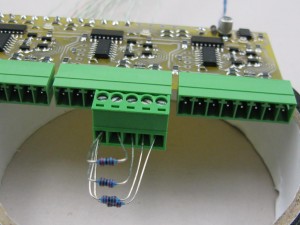 Note: Installation and testing must be carried out by a qualified or suitably experienced security technician.

Have a set of input plugs with 2.2K EOL resistors fitted to test the installation before attaching any input wiring. This will confirm that the board is correctly connected and working before adding external variables.

The LEDs will strobe (brief flash) indicating all zones are closed. Shorting a resistor with a wire loop will cause the associated LED to flash and your system should register a zone activation and tamper; assuming your system is configured to do so.

The important states (voltages) are Closed and Activated. These voltage readings are +/- 100mV (0.1V).

Why measure voltage and not resistance?

Considering one zone: The EOL resistor/s form a voltage divider with a resistor on the board. The board measures the voltage produced and determines the state of the zone. By measuring the voltage you are seeing what the board sees without influencing the operation. It is an accurate representation of what is going on.

Measuring resistance with the board and zone connected, you are seeing a complex combination of the EOL resistors, and on-board resistors. If power is applied, your multimeter will be really confused, but not likely damaged.

The test rig consists of a 12V DC supply, array of 16+1 LEDs with resistors to +V. Two sets of four input connectors are used one fitted with 6K8 and one with 10K resistors. 6K8 represents closed, 10K represents open.