I am sure WPEC is a powerful shop development platform, but as installed requires a lot of work to make it useful.

I have been using WPEC for a couple of years; even bought the Gold-Cart plugin because it offered “better” layout or presentation. As freshly installed, WPEC is barely useful in that product presentation is poor and the checkout process is untidy and seems overly complex. Not what you want to encourage customers.

I never achieved much (probably anything) with the Gold-Cart plugin. With the latest WordPress update it broke the site and I had to go in to the server and re-name the plugin directory to disable it.

Nothing too fancy. The web site is an information site that also sells a few products. It is not a flashy graphical magazine type shop front.

We need a product presentation that is simple, easy to use and can provide a lot of product information.

So, as part of a general WordPress tidy-up I decided to look at WC. The first problem: Does WC work with the Suffusion theme. Unfortunately not correctly, not without modification. So, do we stay with suffusion or switch themes ? The WC people suggest the Shopfront theme.

After testing Shopfront and WC on another server; a few notes:

At this stage, the simplified and improved product presentation and especially the image handling seem to make the change to from WPEC to WC worth the effort. Transferring a large number of products would be a problem, but we can easily cut/paste and reproduce into WC our smaller product list.

This is just a place to drop notes and references:

Without being a wordpress/php programmer, this is tricky. There are several ways to tweak Suffusion to work with WC,

First method tried: This seemed to work but would show only a single column of products where 3 would easily fit across the page. Possibly because WP is using the post display formatting to display products. Also noticed that text under product image is left justified rather than centred.

Copy shop.php to woocommerce.php to the suffusion child-theme replace the loop function as recommended here. This creates a template page that is used by WC.

It is a mature and very capable theme; probably a bit overly complicated. I get the feeling that the developer is loosing interest and therefore it is probably time to look for another theme – especially considering the popularity of WC and the lack of support in Suffusion. 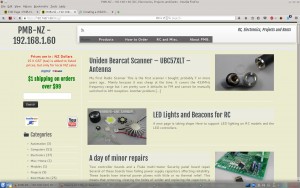 I have found a theme with promise called Customizr. Web site here.  It’s reasonably simple, at least compared to Suffusion and supports my original basic layout with a few variations. It supports WC, seems to work with bbpress (forum) and supports a child theme.

This is a screen capture taken part way through experimenting with layout and colours.

It does have a few limitations including poor graphics and colour configuration support. The creator sells a pro version, which I would buy, except it’s a yearly cost rather than one-off and keyed. I won’t rely long term on anything with lock-in or keying; not that I won’t pay for it, but it becomes a huge PITA in the future. It’s not really clear from their web site what the pro version offers in the way of improved configuration options – making the decision even more difficult.

It is possible to add custom CSS under Customize-Advanced Features, or in the child theme. Another possibility may be to buy the pro version once and cut/paste the small amount into the child theme, or use it as example code to work from.

How to customize; here, and the Menu, Child theme; here, –

I have been experimenting with a bit of custom CSS and have managed to change background and menu colours.

After a couple of days of tinkering

It is looking like I will use Customizer, the free version with a child theme to make changes. It’s good enough that I think a donation is deserved, so I will probably buy the Pro version once just to see what it offers. 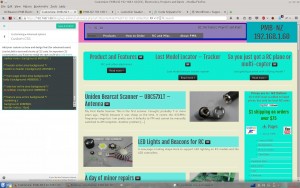 Another day of experimenting; looking at the CSS files and adding custom CSS in “customising advanced-options custom-css”. Bright colours make it easy to see what is happening.

Saving the discoveries to a file of notes with comments. These pieces will go together with appropriate colours defined and go into the child theme.

I have been using the free version of Customizr for some time. As it worked out I am using a Child Theme, but most of the layout changes are still in “customising advanced-options custom-css”.

I have found a major problem with Customizr – Google Fonts.

Customizr, the free version, forces the use of Google fonts.  I have noticed occasionally very long load times with the browser stuck waiting for fonts.googleapis.com.  My concern is that if I’m seeing this from my site, how is it affecting others.  How delays are handled depends on the browser being used.

Although I think loading fonts from a third-part is a stupid thing to do, I would put up with it if it didn’t slow things down.  In general, I think everything forming a page or site should come from the one server.

Customizr does suggest that the pro version provides more control over fonts, but it doesn’t say what control.  Does it allow the elimination of Google fonts in favour of system fonts ???

In my opinion, it is absolutely stupid to force the use of third-party font’s. Had I known about this before investing so much time in the Customizer Theme, I would have put more effort into finding an alternative.

A quick search of the theme files return 4 files containing references to “fonts.google”.

It may be possible to edit these files and clear the theme of Google fonts.  A job for a rainy day.  I’m not sure yet, but the options are probably to either serve the fonts from the same server or to rely on standard system fonts.  There may be complications with future updates if these files are modified.  Can the files be moved to the child theme ?  I don’t know enough about how it works; yet.