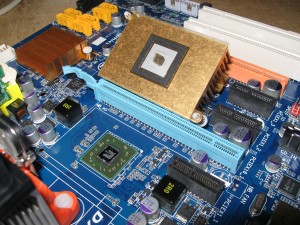 The original web server I was using failed to restart after applying some routine updates. It was getting stuck in POST and not getting as far as trying to boot the OS.  I swapped out the power supply then RAM, but the fault stayed with the motherboard. It would work while lying flat but would not boot standing normally, suggesting a connection failure on the motherboard. When it was running, the CPU temperature was OK but the northbridge was getting hot. The heatsink compound had dried up and I suspect a BGA solder problem. A pity, as it’s a reasonable AMD dual-core 2.something Gig machine. 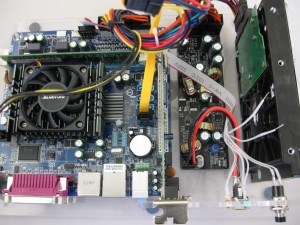 I had been intending to move the server to a Mini-ITX board for some time, and had a Gigabyte E350N board that was to replace the old HP machine running Zoneminder. The plan was to do a quick swap to get the server running on this board. As it turned out this took more than a day.

The basic setup was easy enough, but WordPress broke most of its links when reinstated. Even with a direct copy of all files and a backup-restore of the database, the links broke.

I’ve had this problem before with WordPress and IMO it’s a major failing of WordPress. Switching back to the default permalink structure restored most posts and pages but left over 100 broken links that had to be individually edited back into shape. There are plenty of references on-line to this problem, and most suggest refreshing the permalinks will solve it. Not in my experience. I suspect the problem may be made worse by some plugins. Most of the broken links were inside posts or pages that referred to other posts or pages. I installed a plugin that listed all the broken links and made it easier to find and repair them one by one.

So, after a lot of work, WordPress was back up and running, although with a different permalink structure. The problem with this is that any links to this site are now broken. As there were probably not many incoming links I decided to leave it with the default permalink settings; not the most descriptive links. I’m not sure if reinstating the custom permalink structure after switching back to default, will restore the original links or come up with some new ones. I am hoping that by leaving it at default this will help prevent the same problem in the future. 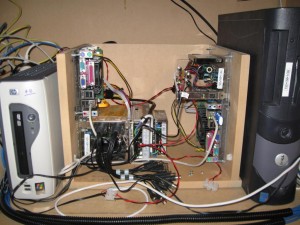 I now have two mini-itx boards mounted together with a 12V 150W power supply.

The 12V power supply also powers the HP-Mini to the left. The old DEL to the right is still running Zoneminder; which will soon be moved to the mini-itx board on the left. This board has a 8-input PCI capture card installed. I still have to sort out a tidy way to power and connect the cameras. The smaller power supply is a 24VDC supply to power a remote wireless AP and camera via POE. This supply needs upgrading as it cannot start the AP and Camera at the same time.

The 5V supply from the web server is also powering a Raspberry Pi.

The plan now is to build a circuit board module to handle power distribution to cameras, POE devices etc, VDSL line, master filter and phone connections, and camera video baluns. This will tidy all of the wiring so that it all just plugs together.

This happened very soon after getting the server back in operation. This is another story for another post.