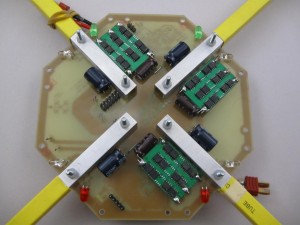 At the last indoor flying event I found that one of the motors on my quad was doing its own thing; beeping randomly, starting and stopping when the controller was in safe mode.

The ESC is one of 4 HobbyKing SS (super simple) 20 Amp I bought about 2 years ago. In this application the wiring covering and heatsinks have been removed and they are soldered directly to the power board of the quad-rotor. They have not been re-flashed with SimonK firmware as there are reports of the SS series failing due to the higher switching frequencies.

I removed the top controller board and checked the lower power board for joint problems that may have been caused by the few hard landings 🙂 No faults found but the ESC fault was affected by flexing the power board or tapping the ESC. 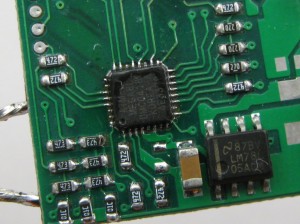 Removing the ESC and running it on the bench with a current limited power supply and servo tester showed that it was not happy; still behaving very strangely. It seemed to be most upset when the CPU was touched. I ran the soldering iron and a bead of solder around the CPU and re-tested. It was now performing correctly.

These ESCs use the smaller CPU chip package without pins/legs. The tiny pads on the bottom edge of the chip solder directly to the PCB. There is no room for flex. Many ESCs use the slightly larger TQFP package which has short legs and a larger contact area with the PCB.

The other likely problem is the use of lead-free solder. It does not produce as good a connection as the old lead/tin solder.

So, it looks like one or more of the solder joints between the CPU chip and the PC-Board had failed. Luckily the ESC didn’t get too confused and destroy itself by applying a short across the battery.

When testing speed controllers it’s best to use a current limited power supply. This means that “when” something goes wrong there is not enough current available to turn it into a smocking mess. Keep a close eye on the current and voltage and switch off as soon as something looks wrong. Using a battery is a very bad idea. There is no way you can un-plug it before the battery delivers 100+ Amps and destroys it.

The image shows the motor wiring on the left and the power and servo lead on the right. With a current limited supply; 4 Amps in this case; heavy power wiring is not needed. Just using a spare in-runner motor to hear the beeps and see what happens.