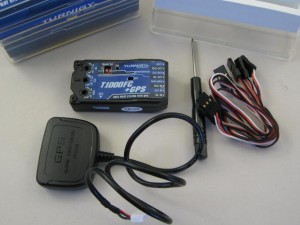 I have connected the T1000FC to a 8-channel Corona DSSS receiver. Channels 1,2,4,6 (aileron,elevator,rudder,mode). Channel 3 (throttle) from the receiver goes directly to the ESC. There is no connection to the BATT terminals on the end. Power is applied via the leads from the receiver to t he T1000FC module. Channel 6 was initially a pot on the transmitter providing full range (1000-2000 uS). The 3 gain adjustments are set to about half in the normal direction. Three 9g mini servos are used for bench testing.

The two DIP switches on the T1000FC are in the “normal wing” position (as supplied, both up).

There are 2 LEDs, red and green. The RED LED indicates initialization and operation. The green LED indicates flight mode as set by channel connected to “Auto-pilot” (RC channel 6 in my case).

There is reference to a sensor calibration operation that is initiated by setting both DIP-Switches to ON and then applying power while the T1000FC is flat/horizontal and still. The red LED flashes for about 15 seconds before returning to normal, which depends on the mode setting.

Before connecting the GPS

With the transmitter ON, the green LED follows the mode control; lo-med-hi = off-on-flashing. With the transmitter OFF the green LED flashes and stability mode is enabled. Applying power and the red LED flashes 2 times then stays on. The aileron and elevator servos move to counter T1000FC movement; ie. to hold the plane level. The rudder servo does not move with T1000FC movement. Probably because without GPS it doesn’t know if it’s going in a straight line or drifting off.

Flight modes without GPS are:

With the GPS plugged in 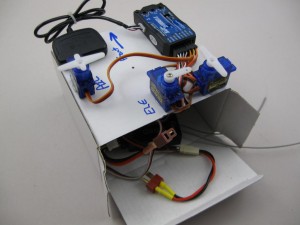 A loss of GPS returns to altitude/attitude stability mode. Power on and the red LED flashes twice then a short delay before flashing. The blue LED (GPS module, see below) seems to be the only indication of a GPS fix.

Flight modes with GPS are:

It seems that with the GPS connected, there is no manual or pass-through flight mode that does not include stability assistance.

There is suggestion of more than 3 flight modes when the GPS is connected; selected using the 3-position switch. These modes and GPS operation are not yet clear.

I have done another walk test with the cardboard box setup. The RTL mode did sort of make sense, but I also had some inconsistent results, suggesting there may be more flight modes controlled by the 3-position switch.

You cannot set the home position until it has a GPS fix. Hold the button for 3-5 seconds and the red LED stays on for 3 seconds then goes back to flashing, and home should be set. If it doesn’t indicate, wait a minute and try again.

When you have only rudder response from the RC, I’m 90% sure you are in RTL mode; the T1000FC is looking after ailerons and elevator.

I don’t know how it determines what height to fly at, but at ground level it sets the elevator for a bit of up.

I’m still not sure how the other flight modes work when the GPS is connected.

To date, there are some comments on the forums as to how it works, but they seem to be untested and just add confusion. I’ve only seen one report on line of anyone actually flying it, and that plane went home in a rubbish bag.

I need a small model that bounces really well for the next stage of testing.