I’ve had two ESCs fail in one day, one in a zero-throttle fast descent and one while bench testing with no props and running off a 5A current-limited bench power supply. Both play the little tune through the motor when powered on but ignore PPM input and do nothing after power-on.

The Quad setup has a Hobbyking Multiwii Pro controller, 20A blue-series ESCs flashed SimonK, Dynam 1200KV motors, 10×5 cheap HK props, two 3-cell 2200 20C in parallel. And a mosfet power switch for push-button on-off, which is very convenient and provides a clean power on and off. Last time I checked (some time ago) it was drawing about 12A in stable hover with 10×6 props.

I have noticed that when bench testing on the 5A power supply, rapiid motor deceleration causes generaion that increases the power supply voltage enough to clearly make the orientation LEDs flash brighter momentarily. This didn’t happen with the old ESCs (standard super simple series) when running a KK2 board.
The power supply cannot deliver enough current quick enough to damage the mosfets, but it does allow the voltage to overshoot on deceleration; I don’t know by how much.

As the failed ESCs still play the tune and don’t draw extra quiescent current, I suspect the mosfets and drivers are OK. I traced the PPM signal to the CPU pin and checked all soldering etc. Maybe the CPU flash or eeprom is corrupted. The Multiwii controller was connected to the PPM input and it’s still OK, so a failed input is unlikely.

I will try reflashing the ESCs and if that doesn’t help, I could replace the ATmega8a CPU.

I wonder if rapid deceleration has the same generation effect as seen with the power supply and higher than normal voltages are upsetting the ESCs. In flight the battery should absorb this energy,preventing a problem.

It’s a cheap ESC but as mentioned before, I’d like to know what failed and why. 2 similar failures in one day at different times seems to suggest a problem.

It plays the normal startup tune no matter what the input PPM setting. I can see the PPM on the CPU pin with the oscilloscope. I’m not sure about COMP_PWM, although there does seem to be good regenerative braking. I just used the default bs_nfet.hex recommended by the spreadsheet .

I have taken the ESCs out of the quad and tested with a good servo tester that supplies 4-5V of PPM signal. I haven’t tried I2C or serial; I’m not set up to do it easily. I will try a re-flash next.

I flashed these about 4 weeks ago and they have been OK during initial testing with props off and on with the quad tied down. Yesterday were the first real flights, not too stressful. All good until the fast descent which was only a few seconds at most.

About 2 months ago a friend lost his hex in the bush near where I was flying yesterday. It just slid off backwards and went down fast on edge. He was also using BlueSeries ESCs, but with a Naza controller. I wonder if he lost a motor. We will have to renew the search.

A 20A BlueSeries with the same bs_nfet.hex and it is working again. Something must have been corrupted. Used a AVRISPMKII programmer. ESC powered from bench supply through multimeter with a internal 250mA PTC fuse. Switching to the 10A range to test with motor running.

Now to find out what’s causing it.

A few notes from recent testing 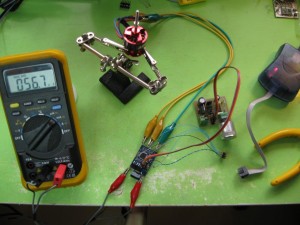 This applies only to this particular ESC and test setup. I’m not suggesting there’s anything wrong, this is just what happens with my test rig.

Testing with a 5A current limited power supply set to 11V and servo tester. How it reacts varies with supply, motor and what’s on the shaft. A propeller will decelerate faster but may act as a wind generator when descending fast on zero throttle.

Decelerating quickly, the motor with no prop can easily generate enough to push the supply voltage over 20V for 100mS (oscilloscope on supply). Additional load on the supply reduces this. In normal multirotor operation, this shouldn’t be a problem as the motors mostly alternate. A fast free-fall descent would be interesting as all motors may generate together, but the battery should absorb this.

Going full throttle to zero very quickly often causes the motor to stop and the ESC to lock up drawing the full 5 Amps. Adding a large capacitor (4700uF) right at the ESC mostly solves this, so with a battery connected it shouldn’t be a problem. According to the scope, the supply voltage is not dropping but is spiking well +ve preceding the lockup.

Reducing the supply voltage to below 6V I was able to reproduce the confused ESC fault without drawing excessive current. Re-flashing it solved the problem. 6V or less shouldn’t happen in flight, but it does indicate that it’s possible to confuse the ESC, requiring re-flashing.

I wonder if the eeprom is being corrupted.

My Multirotor has a electronic power switch between the battery and everything else for push-button on/off. Although it has a 140A Mosfet, it does introduce impedance.  There are 4 extra 1000uF capacitors in the ESC supply. It’s all built into a power distribution board.

I’ve been running this setup for ages with a KK2 board and SS series ESCs  without any problems. The difference now is MWC and flashed BlueSeries ESCs.