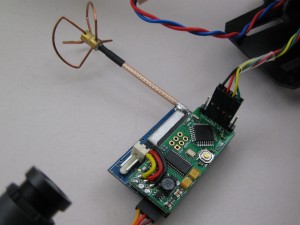 I got a couple of these TS350 10mW 5.8GHz FPV transmitters from Hobbyking and a set of these circular polarized antennas with SMA connectors (pin centre). These were the wrong antenna connectors, I should have got the RP-SMA (hole in centre) type; these.

Because I go the wrong ones I cut the plugs off, fitted a new plug to the receive antenna (4-lobe) and soldered the transmit antenna (3-lobes) directly to the transmitter.

To test I attached the camera, transmitter (with OSD) and 3-cell LiPo battery to the top of a 1.5M wooden garden stake and went off to the local river.

The first tests didn’t go very well at all. Range was much less than I was expecting. Beyond about 50 meters the video was noisy and there was interference that looked like wifi noise.

This suggests that with matching polarizations (both RH-CP) , using a helical receive antenna, the 10mW FPV transmitter should work out past 700M, and probably to 1KM or a bit more.

Miss-matched polarization reduces range, and you see a lot more interference, even at closer ranges.

This transmitter has been modified to operate only on channels that fall within the local ISM 5.8GHz band. The modification procedure is almost identical to that shown here.

I’ve got this transmitter/OSD setup on a new quad. When the weather improves or at the next indoor flying, we’ll see if it works.