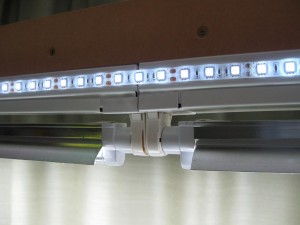 I have been considering replacing fluorescent tube and compact fluorescent lights with LEDs. So I decided to do a quick test with some LED strip.

This picture shows the fluorescent tubes on and the LED strip dimmed to a low setting.

The LED strip is stuck to the side of the fluorescent fittings, so the lighting pattern is not a good comparison.

To achieve roughly the same light level would require about 2/3 the wattage of LEDs as we have of fluorescent lighting in the room. The advantage of LED strip is that it would provide more even lighting and can be dimmed when a lot of light is not needed. Dimming should also increase the life of the LEDs.

For good general coverage, three strips of LEDs would be required at the top-centre of 3 walls. This  would be about 75 Watts of lighting but could probably be run at 20-30 watts most of the time.

And it’s a big problem. On this LED strip the sticky back is totally useless. See below.

What would be an ideal LED lighting setup

For this room: three 2M lighting strips consisting of LED strip attached to a alloy angle support, mount, heatsink, reflector. These would be mounted at the top of three walls mid-way and wired into the wall/ceiling. At the light switch would be a low voltage dimmer control.

Wiring would have to consider the 2 Amps draw of each strip at 12 volts. Alternatively the 2M strip could be made up of two 1M strips wired in series for a 24V supply, which would reduce the maximum current to about 1.2A per unit.

The switch/dimmer could consist of a ceiling mounted dimmable power supply and just the low voltage control switch in the room. 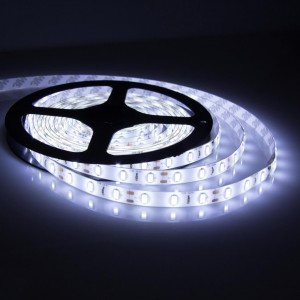 Thinking about it some more, I like the idea of building this system. So I had a look at our local auction site (Trademe) for some more 5050 size 14W/M cool-white LED strip. Per 5M reel the price ranged from $33 to $130 +shipping. I don’t know what that seller is thinking at $130. Next stop, Ebay.

I have bought from Ebay six 5M reels of cool-white 5630 LEDs for about NZ$75 delivered.

Why strips and not 10W COB modules?

Because the strip provides light from a much larger area and greatly reduces shadows. The strip is also easier to build in to tidy fittings that provide natural heatsinking and cooling. The COB modules require large heatsinks or need fans.

The plan is to test DIY LED strip fittings in two rooms.Each fitting will consist of polished alloy angle with one or two strips of LEDs each configured for 24V operation. The alloy will provide a tidy and easily mounted support for the LED strip and a reflector/baffle directing the light output to a little over 90-degrees from the 120-deg. of the LED strip alone.

First I will assemble a shorter test fitting.

I have a 24V battery backed power system for other gear, which can also supply the LED power. 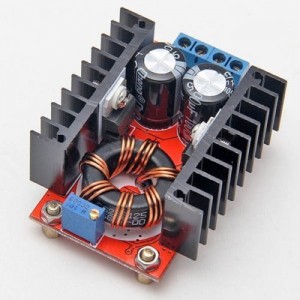 A low cost boost converter (here) will provide a regulated 28-30V to the dimming controller.I expect to have to put additional filtering on the input and output of the boost converter. Probably a good idea anyway since the wiring will run out 5-10 meters from the convertor.

Now I just have to design a dimming module for the control system.