Just sitting there it went poof

I was about 3 metes from the quad playing with the Multiwii Android app on the phone. The quad on the floor by the door and powered up with a 2200 3-cell Lipo. The app alarmed and said “no data received”. When I looked at the quad there was a 2 foot column of white smoke coming out the top. I quickly unplugged the battery and determined that was not the source of the smoke.

The quad is quite densely packed with modules and wiring so I couldn’t see where the smoke was coming from. The burning smell was everywhere. The bottom plate was warm and the Bluetooth module was hot.

I have spare parts but have to find out what happened and make sure it doesn’t happen again. Luckily it wasn’t flying at the time.

Testing using a 12V power supply connected in place of the battery showed a good 4.98V supply to the flight controller, which was dead. Time to pull out the controller. Autopsy required.

The Bluetooth (BT) module smelled a bit off so I cut the heatshrink off it. Testing it revealed that the 662K (SOT-23 3.3V regulator) was outputting just over 3.6V and the module was dead.

The flight controller board was in a matching small blue plastic case. Looking closely at the board, all the tracks diodes and voltage regulators seem to be OK. But the ATMega2560 CPU shows signs of heat stress and has a crack in the top. That explains where the smoke came from.

The big question is – what caused it? – The CPU and the Bluetooth module – Murder Suicide – and who started it ???

The cause – Best guess 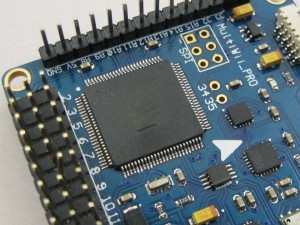 I suspect it was the BT module that started it. But it shouldn’t have been able to take out the CPU. The BT module was hot and had heated the fibreglass tray it was stuck to, suggesting it was hot for a while.

Power supply rating for the inner module is 3.3V @ 50mA. The 5V-3.3V regulator on the Hextronic carrier board is rated to 250mA, assuming it’s the real thing.

Still, the BT module could not have supplied enough voltage +ve or -ve to the CPU to kill it.

Another possibility that killed the CPU is a phenomenon called latchup. It happens in poorly designed systems and results in a chip like a CPU developing a internal short circuit, often ending in failure.

Both modules are Hextronic branded and from Hobbyking. The CPU operates at 5V, with 5V serial port connections and no protection or resistors in the data lines. The BT module supports 5V power thanks to the Hextronic regulator, but the BT417143 main chip does not have 5V tolerant I/O. Considering it’s directly connected to the 5V FC-CPU we have a problem.

So that’s possibly what killed the BT module, over-voltage on the RXD pin, possibly leading to latch-up within the BT chip, leading to excessive current draw, leading to the voltage regulator failure.

But, how did that kill the ATMega2560? Worst case, the BT module could have driven the TXD pin from the CPU low or high, effectively shorting it out. I’d expect this to kill the pin before it took out the whole chip. Something caused a thermal runaway. Maybe another latch-up, but without more than 5V available, I don’t know. 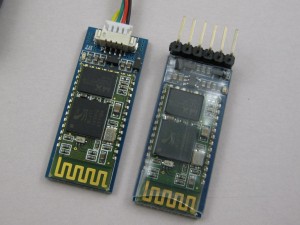 I can replace the flight controller and Bluetooth modules with identical spares.

To overcome the 5V-3.3V interface issue I can install a resistor-divider in the data line from the CPU to the BT module. This will drop the TXD voltage slightly and limit the current.

The BT module on the left is the one from Hobbyking with 3.3V data levels. The one on the right is from Ebay (GoodLuckBuy) and has 3.3-5V data levels. I’d recommend this one if buying new.

Note: You can also get the Crius AIO flight controller from Ebay (GoodLuckBuy) cheaper than from Hobbyking. It’s also a better design design than the Hextronic copy; different pcb layout and includes resistors on the main input output lines. The ones I got also have the extra data logging flash memory.

Next time I’m ordering from Digikey I’ll get a few spare ATMega2560 chips and then repair the failed FC board.