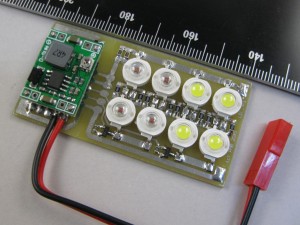 This strobe can be supplied as a dual-colour or single-colour configuration.

As dual-colour it alternates between the two colours.

RC PPM control allows it to be switch on/off in flight, and between two patterns. The RC control lead can be cut off if not required and the strobe flashes the default dual-pulse pattern.

Why a new Strobe ?

Our existing bright daytime visible strobe is white.  Red, green and blue LEDs are available in the standard 10 watt format but are not as common as white.  So I have designed a new strobe that can be assembled for single-colour or dual-colour using 4 or 8 of the common 3 watt LEDs.

The new design includes a voltage regulator that allows operation from a 3 to 6 cell LiPo battery (or 10-26 volts) without affecting the intensity or reliability.  At higher powers LED lighting usually becomes much more sensitive to voltage variations, and a 3-cell battery can vary from 12.6V fully charged down to 10V when discharged.

The new design is assembled with all parts on the front, leaving the back clear and flat for easy mounting.  Applications include visual indicators for multi-rotors and other RC aircraft, especially useful on large gliders.

During development we have a board with a temporary programming connector attached and a power lead.  The board is configured to flash the LEDs only very dimly to start. At higher powers the strobe is too bright to have blinking away on the work bench.  The capacitor on the right is just for testing, it is not normally connected.  During testing a bench power supply is used, set to about 9 volts.

The small grey wire is the temporary power connection.

As a strobe, the average power and therefore heat dissipation is much lower, but the intensity and visibility is high. If several watts of LEDs are run continuously for any period, then several watts of heat must be dissipated to prevent overheating and early failure.  The strobe flash is approaching the peak power rating of the LEDs but is only milli-seconds in duration.

As a dual-colour strobe there a four 3 watt LEDs of each colour. These would usually be red and white or red and green.  The colours flash alternately as per our standard flash patterns.  If RC control is connected, the strobe can be turned off remotely and switched between two flash patterns.

This can be assembled with eight 3 watt LEDs of the same colour; white, red green or blue. Operation is the similar to the dual-colour version except that all eight LEDs operate together. Similar to our existing 10 watt strobe. 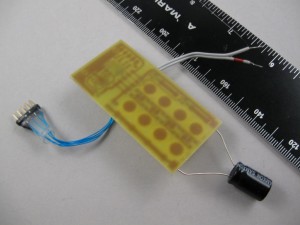 The back of the board is flat with no components or holes to simplify mounting with sticky tape or velcro.

The strobe unit consists of one circuit board module of 31×62 mm That can be cut into two smaller parts and wired together if required. The larger part carries the eight LEDs. A 4-core wire connects the two parts.