With the hot summer days I decided to have a look at improving my fridge temperature controller.  A couple of timing adjustments will probably improve it and reduce icing.

Not wanting to experiment on the working fridge, I built a small cold-box from foam PVC board covered with a layer of insulating foam.  The plan was to mimic the operation of the full size fridge on the work bench. 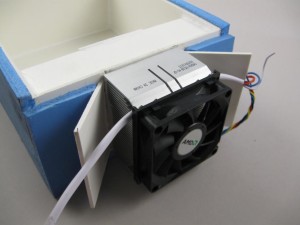 A 50W peltier device with 2 heatsinks and 2 fans are mounted in one wall.  A couple of plastic fins direct the warmed air out away from the box.  The heatsinks and fan were recovered from a failed PC motherboard.  The power draw, peltier and fans, is 68 watts at 12V DC. But this includes the mains power supply losses.

With peltier, fans and power supply losses the mains power draw is 68 watts.

I was expecting (hoping) that with reasonable insulation the 50 watt peltier device would get the temperature down to 0 degC or lower.  I was a bit surprised when it only managed 12-14 deg-C below ambient; with 25 deg-C ambient.  No where near what I was expecting.

The original mounting had the peltier sandwiched between the two heatsinks and screwed together. There were a few problems: 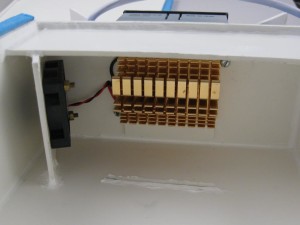 I have tried adding a fitted layer of corrugated cardboard over the foam insulation. This only improved it by about 1 deg-C.  At maximum cooling the ambient temperature was 25 deg-C and the outside of the box was at 23 deg-C.

Apparently, running at higher power levels is more effective, but efficiency probably has more to do with heatsinks and conducting heat in and out of the peltier device.

I don’t think heatsink compound is as effective on the cold side as it is on the hot. The cold causes it to solidify rather than flow and thin out. Heating the internal heatsink may improve the thermal contact.

I may add a couple of internal baffles to better duct the air-flow through the internal heatsink.

I suspect that if the heatsinks are not operating at best efficiency, especially the cold side, then the peltier device is much less efficient. If heat is not effectively conducted in, it will get to -?? deg-C but not fail. The emitted heat on the hot side is just the energy supplied from the power supply.

Effectively turning off and on a measured heat source applied to the cold side and measuring the exhaust temperature on the hot side may be a reasonable way to measure the heat-pump efficiency.

If the hot side is not effectively cooled, the peltier device will overheat and fail internally; de-soldering itself.