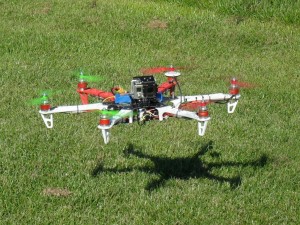 What’s with these Multirotors?

So it’s now the end of 2013. Over the last 2 years Quad, Hex and Octo Multirotor flying as part of the RC hobby has become very popular and is growing fast.

The parts needed to build a multirotor are now cheap and easy to get from many suppliers. They are quick and easy to assemble from these parts or with a bit more planning and effort you can build from scratch. The frames are simple and can be made from any combination of plastic, wood or metal.

The parts to buy are motors, speed controllers (ESCs), flight controller and batteries. Just about any standard RC radio and receiver set will work.

Add to this a stabilized camera gimbol and controller, and you can get some fantastic video and photos from the air.

Until recently, getting a multirotor working was a bit of a challenge. The controllers that worked without any fuss were far too expensive for most hobbyists. Now you can buy a good ready-to-go controller with accessories for under $500. For $50 to $200 you can get an equivalent controller but it requires firmware loading and setup then flight testing and tuning. Not a process for anyone new to this technology.

Even the cheap systems are now capable of automatically assisting the pilot with stability, maintaining a position and altitude and automatically taking off and landing.

Makes it sound easy – doesn’t it? 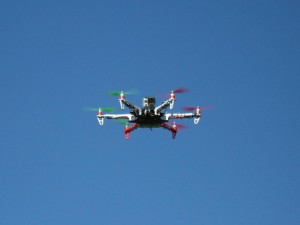 So what’s the catch?

Multirotors are a bit like a model helicopter, if the motor stops they come down fast, and there are 4 or more motors to worry about. Unlike a helicopter they do not autorotate to a safe landing but tumble out of the air and end up broken.

The flight controller is working to keep the multirotor level and under control. To do this it reads from sensors that precisely know the angle and movement of the frame. It rapidly adjusts the motor power to control movement and position. When everything is working the machine is very steady.

But it can take a bit of work to get these sensors and the controller tuned in. During this time the multirotor may be unstable, unpredictable or uncontrollable. The tune-up process can be quite complicated and time consuming, and result in crashes and damaged parts.

To avoid this you can just buy a working unit like a DJI Naza controller. A controller that is mostly pre-configured and ready to fly. This will cost more and limit you to the functions it came with.

The Hobby DIY Build a Multirotor

The hobbyist is more likely to buy the individual parts and build their own. Then install and configure the controller programming and finally tune it up for best performance. BY this is completed it’s about time to upgrade something and repeat the process. BUt that’s the fun of building RC multirotors.

Everything you need is available from Hobbyking on-line.

What could it cost?

The hobbyist does not count the cost of their spare time  in the build process. So for a basic but pretty reasonable quad ready to attach your HD camera and get some scenic video , the cost could be about $900 in parts:

These are ball-park figures. You can spend more or less on any of these parts and we won’t get into that argument.

The time it takes to put all of this together, get it configured and tuned will vary greatly, but you should probably allow 2 to 4 weeks of your spare time.

Commercial off the shelf Systems

There are now quite a few of these available starting with $2000 kits that will require a lot of work to make commercially usable, through to systems and training costing as much as you are willing to pay.

None of these are like cars, where you start them up and off you go. They are more like computers in that you have to configure and fine tune before they will work well enough to get useful, and they also crash occasionally. Unlike a computer crash you multirotor will need new parts before a restart. It can be expensive when added to the HD video camera hanging under the multirotor that broke its fall.

You are still going to need someone to learn about these systems, look after them and operate them; do it yourself or pay someone.

Can a hobbyist supply a commercial system?

Yes, but mostly no. Many hobbyists will disagree and that’s OK. This is based on having done this type of work for many years.

There is a lot more to building, selling and supporting a commercial system than most hobbyists realize. If they are prepared to provide their time at little or no cost then it may work. But if you are paying $50+/hour and they are counting the hours accurately, it will soon become very expensive.

Many hobbyists have the skills to build the machines. The problem is not the cost of the parts, it’s the time it takes to build it, make it work and support it. And therefore the cost.

To the Hobbyist: You will probably have to build two machines and have a complete set of spare parts sitting on the shelf waiting. You need to choose a system that is good enough to get the job done and be reliable but not be too expensive or overly complex in its engineering. Reliability must be 100% (or better) as it will be carrying the customers expensive cameras. What happens when the customer phones you at work and says “it won’t work and we’re on site, what do I do or come and fit it now”. What happens if the customer comes back and says I need two more by the end of next week for a big shoot.

Could it be done? Yes I think it could be done a lot cheaper than most of the major commercial systems. I agree with the Hobbyists but possibly for different reasons. Competition is growing and systems are getting cheaper but not yet much better or easier to use. Regulation and public perception are still major problems.

As a hobbyist you should really approach a local RC model aircraft club. Many clubs now have members building and flying multirotors. If your local club doesn’t or is not very helpful, try the on-line forums. You should be able to talk to someone in your local area.

As a potential commercial operator it’s a lot more difficult at the moment. First you should talk to CAA to find out what you are allowed to do and what the red tape is going to cost you.

It depends on your definition of drone and which side of the fence you are on. It really for public image and this is controlled by the media. They are turning “drone” into a bad thing; but considering that in general they are only interested in sensational headlines and not fact or real information, we should not expect any better.

Many multirotors have some autonomous flight ability, but this is generally a safety feature used to bring the craft back to the pilot in case of radio problems.

Most multirotors and flown similarly to RC model aircraft, within short range and manually by a pilot on the ground. Some are flown FPV (via a radio video link),but these are generally also flown short distance by a pilot watching the video and a spotter helping the pilot.

This is another issue being raised by the uninformed and the media looking for headlines.

Many multirotors carry cameras and can take very spectacular aerial video and scenic photos. Contrary to media claims they cannot easily be used to follow or spy on people. The basic reasons are that : to get a steady image you need a reasonably large sized machine which makes it more noisy, obvious and more expensive. Then you need a good expensive camera. And a pilot prepared to fly it into places a sane pilot would not.

It’s just a lot easier and you will get much better pictures or video doing it the way it’s always been done; with a camera, long lens, a lot of leg work and hiding in the bushes.

Maybe in the future when the media start using multirotors and the operator didn’t pay for it or build it, we will see them used more daringly. I look forward to this as it will then be worth attending events just to see the media crashing their expensive multirotors.

At the moment the authorities are unsure what to do about small UAVs which includes these multirotors. UAVs range in size from pocket-size to full-size aircraft. The authorities probably want to keep everyone happy but without giving up any control. Their first approach is to treat a 1Kg machine that flys around the back yard like it was a 4-seat passenger plane. To any sane person,  this is obviously stupid.

To anyone who sees that the general media are looking for sensational headlines and actually provide almost no accurate information, it doesn’t seem that complicated. Leave small UAVs, under 2 to 4 Kg alone and simply apply existing model aircraft restrictions. Accidents and offences during their use will be handled by existing laws and procedures.

Another possibility is that the authorities (the US in particular) are afraid of where these small UAVs are going. They don’t want to control them, but they don’t want the average person and media having access to such a cheap and powerful technology. As small UAVs improve (smaller, quieter, better controls and longer flight times) they could become a game changer. The next technology to change the world, as the computer and then the cell-phone did for the general public.