I have a couple of applications in mind and thought these boards looked quite interesting.  Small, low cost reasonably powerful.  So I bought two each of the Orange Pi Lite and Orange Pi Zero boards, and a couple of camera modules.

The first application is a weather station, which is now operating using the Zero board – see here.

I expect to update this post as time permits – see updates below. 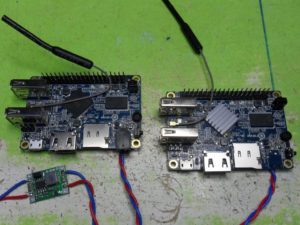 I started off with the OP-Lite board, which was probably a mistake – as it has no ethernet connect and you have to get the wifi working – which proved to be a problem.

The first step was to arrange power.  The available information suggests 5V at 1.5A minimum, preferably 2A.  I don’t like and would not use a wall-wart charger for this so I arranged one OP-Lite to run on a small 3A DC/DC regulator fixed at 5V and a second OP-Lite to wire directly to a 5V bench supply.  The regulator allows supply voltages up to 28V and should easily supply the current.  On both boards I soldered the supply wiring directly to the board, eliminating the DC power jack; removing the DC jack from one of the boards.

BTW :  the resistor needed to fix the regulator shown at 5V output is 47K + 1M in parallel.  This resistance replaces the original small pre-set-pot.

The next step was to find a suitable image to try out.  Since I want a server or headless system I downloaded the Armbian image for the Lite board.  None of the Google-Drive links on the Orange-Pi web site worked – more on this later.  Using my standard Kubuntu laptop I wrote the image to a 8GB micro-SD card.  This did not go smoothly to begin with;  dd reporting that the card was read-only.  Swapping the USB reader seemed to solve this.

Trying 8 or so times writing the card and testing, nether of the OP-Lite boards would boot.  So after several wasted hours I tried the old Windows-7 PC; having to install programs to format the SD card, unzip the 7z image and to write the image to the SD card. So much more difficult than in Linux, but that’s what I’m used to.  Nothing worked; the image written using Linux or Windows.

Maybe it’s a faulty image ???  So back to find another image to try.  None of the Google Drive links on the Orange Pi web site worked, just nothing.  As a last resort I looked at the page source and found the Google URL, copied it to a new browser tab and it worked; I was able to download Lubuntu.  But I noticed the file name suggested it was for the Banana-Pi.  I tried it anyway, but it did nothing.

Having written and test the Lubuntu image, the OP-Lite still doesn’t boot.

Some Success – They both Boot

I decided to try another micro-SD card, this time an older 4GB card.  This card was much slower to write, the Armbian image using dd on the Linux laptop.  But this time it worked. Puttin the card in the board and applying power, I noticed that the current draw fluctuated between about 150 and 300 mA and a green LED came on.  The current draw finally settled on 187mA, after a few minutes.  This is all without pushing the power button (see below).

The Transcend 8GB class-6 card would not boot, but the Apacer 4GB class-4 card worked in both boards.  I need to get a few more micro-SD cards.

At 5V the OP-Lite board draws 108mA with no SD card inserted.  With a SD card but not booting the draw is 124mA.

I read somewhere that the power button turns the OP-Lite on.  So why does it draw 100+ mA before the button is pressed ?  The comment suggested that after connecting it all up, pressing the power button initiated the boot process.  Having looked at the circuit diagram, I think the power button is just connected to a couple of pins on the main processor, therefore not a true on/off power switch or a reset switch, at least not without active processor assist. 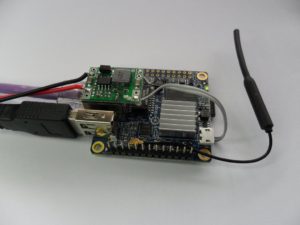 Later on after giving up on the OP-Lite, I needed to get the weather station back up and the OP-Zero was worth a shot.

The OP-Zero has no hdmi connector but has ethernet, so no need to mess with the wifi.  I later discovered that the OP-Zero image included a network setup utility (nmtui) that made it possible to switch from dhcp to a fixed IP address.

This image shows the OP-Lite with a miniature switch-mode regulator attached providing 5V and allowing an input supply of 9-28V DC.

The OP-Lite was frustrating, typical of so many of this type of board.  Potentially good and useful hardware, but crippled by a lack of information.

The OP-Zero was relatively easy to get going, but many beginners will miss the hdmi connector.  Having only one USB socket on-board is a little limiting but can be overcome.

For beginners the Raspberry Pi has a bigger community, but most of that information also applies to the Orange Pi.  My preference is for the Orange Pi.  In my opinion better hardware than the Raspberry Pi,  I still don;t like the Broadcom chip or how the R-Pi put all the main communications through a on-board USB port into the CPU.

So I connected 12V DC to the Orange Pi Lite with regulator attached; still with the original 4GB SD card installed.  It seemed to boot without pressing the button.  I connected a HDMI monitor and USB keyboard.  It had booted, and popped up some extra USB references when the keyboard was plugged in.  It now wants a login and password.  The default login is root and 1234, after which it requires and prompts you to change the root password; follow the prompts.  It does some more “stuff” the prompts to create a new user account. So far so good.

No CL or Terminal Cursor – Orange Pi Lite and Armbian

The command line, terminal and nano editor do not show a cursor.  This makes navigating and editing files VERY VERY difficult.  It doesn’t get much worse than to provide a low cost hobby board with such a fundamental fault.

It may be that SSH access is functional (shows a cursor), but you probably need the terminal and editor to get the Orange Pi Lite wifi working. For a beginner or if you don’t care for the hassles, probably best to avoid the Orange Pi.

I have tried several instructions but nothing seems to work.  Considering that Lite has on-board wifi and no wired ethernet – you’d thing the dumb-arse supplier would make the wifi easily enabled.