It has been an eventful month.  The Orange-Pi-Zero running WeeWX stopped working and later the WH3081 sensor transmitter failed.

The O-Pi-Zero is running from a 16GB micro-SD card and was saving data to a 4GB SD card plugged into USB.  The 4GB SD card was corrupted, probably failing due to 2 years of constant writing. Replacing it with a 16GB USB-drive and reconstructing the folders restored it to operation.  Loosing the SD card did loose about 2 years of weather data – I should have been backing it up, but I am not too bothered as there was a lot of corrupted rain data in there – see below.  At some point I will set up the O-Pi to sync the data over to other storage.

Taking the sensor transmitter down revealed that one of the “rechargeable 1.5V alkaline cells” had leaked.  As a quick fix I attached a small single cell lipo – about 200mAh.  This worked for about 2 weeks then failed again.  More tests showed that the small solar panel on the transmitter was not charging the battery.  Not able to find a small 5V-6V 30x30mm panel I swapped in a 3V panel from a LED garden light and two 1.2V NiMh 100mAh cells.  This is working for now although the console reports low battery.  One of the solder joints attaching a wire to the back of the original glass solar panel had gone high-resistance and could not be re-soldered.

For a long time I have been seeing random very high false rain data recordings – sometimes up to 10,000 mm in one record. 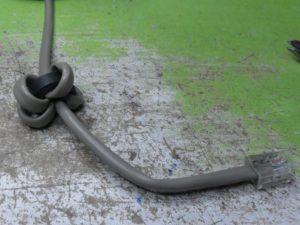 During the 2 days that the sensor head was not working there was one record of 1600mm of rain.  I have 3 consoles receiving from the one sensor (one WH3081 and two WH1081) and I think only the newer WH3081 records false rain data.  Two possibilities came to mind:

Option 2 seem to me to be the most likely and may also explain the USB lockup.  But a day later appeared a 160mm false rain record that coincided with a recorded reduction in signal quality – a burst of RF interference.  It records bursts of reduced signal quality apparently randomly.  Possibly caused by nearby HAM radio on 70cm or someone nearby has a toy on 433MHz.

As at June 4th 2019 I have the console archiving at a 5 minute period and I have increased the WeeWx polling period from 1 minute to 2 minutes.  Increasing the polling period will probably not solve the problem but make it less frequent. 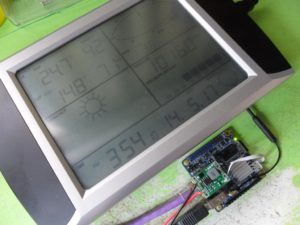 After the failure of the outdoor sender unit and not being able to get a replacement, I have finally had a look at getting a complete new unit working.

The new WH1081 looked like the original but would not work with the installed wview software – USB issues with the console due to a different USB interface chip.  I had been considering updating the software and moving it from a mini-ITX computer to a low-power ARM board for some time.  This was when I got the WH3081, switched software from wview to weewx and set it up on a Orange-Pi-Zero.  This got it working again but introduced the USB lockup problem.

As at mid-November 2017 I see the USB lock up regularly on the WH3081 console in the past month.  Apparently this is a known problem with the console that has existed for some time.  The only solution is to power the console off and back on.

Early in November 2017 the older WH1081 console which had been operating reliably seems to have defaulted the archive time back to 30 minutes.  This is a huge PITA to reset to 5 minutes.

It seems that none of these currently available FineOffset consoles (also sold under other brand names) are reliable enough to be useful.  These sound like minor problems.  But if you want a long term reliable weather station that you do not have to constantly check on and occasionally reboot or repair and you don’t want to be dealing with bad rain data, you should find another system.