What is most annoying

is that Vodafone created the fault and we had to wait two days for the repair.

If they had said “oops our-bad” and repaired it same day – even if it was overtime – it would have saved me a lot of time, I wouldn’t be annoyed at Vodafone and this post wouldn’t exist.

Mid afternoon on the 20-Sept I noticed our internet connection was down.  First step was to check our end and the cable modem before phoning Vodafone.  Once through the annoying automated menus they were quick to answer.  I reported the fault and was transferred to a technical person.  I did mention that we had been accidentally disconnected before and I suspected it had happened again.  But the procedure seems to be to check what they can and then schedule a technical visit, which in our case would not happen for two days. 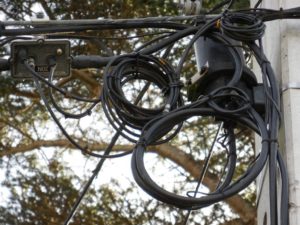 They did send me a survey asking how good a job they did.  Considering the outage was their fault – not very good, and I said so.  This resulted in a phone call the next day.  So I told them about the accidental disconnection and as a side issue, our crappy cellphone performance.  I think their main concern was that I may climb the pole and reconnect it myself (which I had suggested as a possibility) – a potential “health and safety” problem 🙂

The technician phoned the next day and after some tests confirmed that we had been disconnected instead of our front neighbour who has switched to fibre.  You’d think the solution would be get the ladder off the van and poke the wire back in the hole – but it’s not that easy.  They are not allowed to use ladders on certain poles – the up and down ones I suspect.  So a bucket-truck was called, which was on a job 20+ KM away.  Later that day the truck arrived and we were reconnected.

It then took a while to undo the redirections and fault notices and about 6 hours for the dns changes to flow through.

After first talking to Vodafone I checked our driveway security camera record.  This showed a van and the bucket truck arriving and leaving just after 2:00 PM.

I already suspected it was a simple accidental disconnection because it has happened before and I knew our front neighbour has just switched from Vodafone cable over to the UFB fibre.

I have a cellphone connected to Vodafone so they added 100GB of data to my plan for 7 days to see us through the outage.  I did use the hotspot to connect the main computer and laptop occasionally.  But this messed with our internal network and was not very convenient.  A better solution could have been arranged but it wasn’t worth the effort for just 2 days, when I was already behind.  If I had not had a Vodafone connected cellphone, would we have been paying extra for data while the internet was down ?

Our Vodafone cellphone performance is not very good here with very low signal levels and voice calls cut in and out – even the Vodafone tech commented that voice was cutting out,  I do have a borrowed 2100MHz booster which I powered up for the duration of the outage and it seemed to help.  We do have a 2-degrees tower nearby, and I suspect it interferes with our Vodafone reception.

So why stay with Vodafone

The cable is convenient.  Performance is good and we get a fixed IP address which costs extra if not on the cable.

2-degrees would provide better cellphone performance and pre-pay would be cheaper with roll-over (more) data than my current Vodafone account-plan.  I don’t use the cellphone a lot so huge amounts of data have not been a priority.

It seems you do need to change service providers every year or two to keep up with the best value plans.