This prompted me to have another look at the 2.4GHz band. 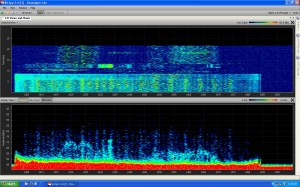 We’ve seen some more 2.4GHz RC reliability problems at the local model club club field. Several models have had control problems, and today two, a foam glider and a reasonably expensive gas helicopter crashed due to control lockout (loss of RC control). Both were being flown using modern name-brand RC gear, the type that offers ultimate reliability if the advertising is to be believed. Several other flyers have had control issues but been able to recover control before the models crashed.

This is a screen capture, using a WiSpy analyzer to look at the background noise and signals on the 2.4GHz ISM band (wifi and RC band). The interference signal is clearly visible in both displays. The waterfall display at the top represents a 20 minute period (top to bottom) of our home network, travelling to the flying field and then a period at the bottom of sitting at the field. The light blue block along the bottom of the top display shows the interfering signal exactly covering the band.

The blue in the lower display shows the normal RC signals from several transmitters and some background wifi.

The RC gear in use 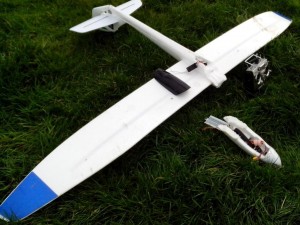 The club flies all types of RC gear from the cheap Chinese to the expensive name-brand. It’s interesting that higher cost or quality of RC gear does not seem to improve reliability. The majority of problems have been with the more expensive gear.

The cheap Chinese sets that pick a frequency and stay with it (no hopping) seem to be OK. Maybe this is because they put no effort into complex FHSS management and just fly through the interference, finding the signal on the other side, on the same frequency. The FHSS system has gone into a complex “sort the problem out” mode and hopped off somewhere when the problem is not actually that serious. For some types of interference maybe they are over-thinking it.

I guess if we knew that there wouldn’t be a problem, or we’d have the perfect radio system. Even the big name system manufacturers can’t answer this one.

It’s interesting that the affected models were using various “good” systems. Does this suggest that some 2.4G installations are not tolerant of increased noise levels, are marginal to begin with, or is there something else going on?

Impossible to say for sure without far too much work, but I suspect almost all of the variations are due to the differing models and installation layout. Normally there is enough of a safety margin that these don’t matter. Add a powerful noise source with a it’s own complex radiation pattern and the first models affected are the ones with the weakest RC receiver/antenna installations.

Installation, meaning receiver and antenna layout within the model, goes a long way to maximizing reliability and reducing the effects of interference. The importance of layout and placement of receiver antennas is usually underestimated. That it worked last week or has been OK up to now, does not mean that it will continue to work. Interference on 2.4GHz can come from anywhere at any time. RC equipment manufacturers provide little or no practical information.

Radio and antennas is part science and part good luck. How antennas work can be explained, but add in close proximity a model consisting of wiring and many metal parts, and you no longer have a simple antenna. Some parts shield the antenna from certain directions and some change the radiation pattern; too many variables to paint a clear picture.

So, what is best practice? – my approach 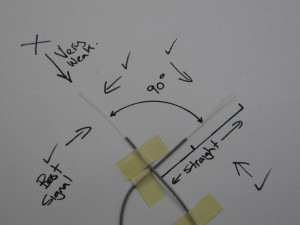 To begin with, assume an ideal antenna. Don’t bend it or modify it. Mount it clear of wiring and metal parts. Mount it so that it will not be blocked or shielded by other parts like servos or batteries. When you have two or more antennas, put them at 90-degrees, “L” or “V”.

The way I look at it is that your receiver installation should be the best it can possibly be to minimize the chances of failure.

Following best practice does not excuse the use of radio jammers but does maximize your chances of surviving the increased level of interference from jammers and all other wifi noise sources. 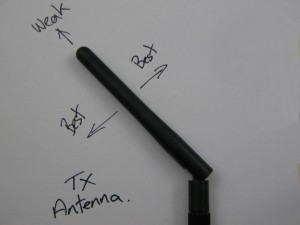 Some transmitters now have the antenna built into the handle. Keep the handle clear and point the transmitter generally in the direction of the model.

This is a conductor and a pretty good RF shield, especially at 2.4GHz. Antennas cannot be inside a CF fuselage. They must be outside, but not flapping in the wind and not stuck to the outside of the fuselage. Best would be to use a plastic tube attached to keep the antenna wire in the chosen place.The active part of the antenna should be as far from the fuselage as possible. Remember that the fuselage itself is a shield when between the antenna and the transmitter, just like a battery will. An antenna on each side of the fuselage and you effectively only ever have one antenna at a time in view of the transmitter.

I have a very expensive model – A point recently raised

A very expensive model cannot be flown if due to some 2.4GHz interference RC control cannot be guaranteed.

This a valid point, but also raises another question. If you have a very expensive, irreplaceable or dangerous model (thinking jets) should you be flying on 2.4GHz? A public free-for-all band of wifi, cell-phones, cordless-phones, data links etc. Maybe you should look at options:

Link budget is a way of describing how much signal there is and how much gets through. Lets say your transmitter circuitry generates 100 units of signal. Some is lost in the lead to the antenna and some in the antenna. The rest is transmitted. Some of that is lost in transit, goes the wrong way or gets absorbed along the way. A small fraction reaches the model, and a fraction of that reaches the receiver antenna. Depending on the antenna, a fraction of that is picked up and passed to the receiver. And so on.

You also have some control over how much is picked up by the receiver antenna and passed to the receiver. This is where the most gains can be made.

The amount of signal the receiver has to work with is a bit like looking at a small dim LED 1 KM away; a tiny fraction of Sweet FA. If your receiver antennas are not ideal, you can’t move that LED further out, but with optimal antenna installation you may get 2-5 KM. It’s a miracle it works at all, so don’t make it harder for the receiver than it needs to be.

Interference is a bit like adding more random LEDs at various distances and locations. A radio jammer is like having thousands of LEDs everywhere you look – the receiver can no longer see the one it is supposed to follow.

Why are the FHSS systems more affected

I recorded the 2.4G spectrum during the recent ALES competition. Five models in each round plus other flying at the field; maybe 8 or 9 models in the air at one time.

It appears there are 50 channels in use by the FHSS RC sets. This fits with the 80MHz band and a 1MHz or less channel bandwidth.

A couple of interesting things come to mind from this image and the days events.

The cheap sets seem to be the most reliable with the jammer operating. They also put out a higher peak power (because it’s not spread across the band). Maybe this enables them to overpower the jammer while the hopping systems are ineffective at avoiding a signal that covers the whole band. The hopping systems, by spreading their energy are reducing their signal strength.

Maybe this is why the apparently low level jammer signal is effective at knocking off wifi, another FHSS signal.

The difference in signal level between the cheaper sets and the FHSS sets is about 25 dBm. A big difference.

Note: these are the levels seen by the WiSpy receiver (and are relative) 1 meter above the car roof, about 30 meters from where the pilots were standing. The models will be seeing much less but still relative.

So: The cheap single channel sets cannot avoid strong interference on their chosen channel as they cannot hop away from it. The FHSS systems can avoid this type of noise, wifi and other RC, but are knocked out by a lower level of noise that covers the entire band; which is unlikely unless you have an unfriendly neighbour with a radio jammer or the band is saturated with wifi.

RC TX antennas are typically 1/4 Wave Sleeve Dipoles. RX antennas were usually just a 1/4 wave stub but some are now light weight versions of the sleeve dipole similar to the TX antenna.

The RX stub antennas are not really matched or tuned and are not very effective. The coax lead is also acting on the antenna. A sleeve added over the coax provides the second half of the dipole and a form of matching transformer which improves signal transfer to the receiver.

Circular polarized (CP) antennas such as the cloverleaf and skew-planar as often used on FPV systems, but built for 2.4GHz, can be used with RC systems. Not as convenient, but likely much more effective (time consuming to prove). I have flown the Corona DSSS system using CP antennas without any problems; but this is not a true test or comparison.

RF is a mixture of science and magic with a few demons thrown in. The above is based on years of frustration, research and testing. If you have some information that is based on real life comparative testing, then I’m keen to hear about it. If you disagree because of the way the bones landed, or because you know someone who uses whatever and it’s foolproof, or your system is ideal because it has never glitched, then consider yourself lucky.